Unraveling the mystery of the hygiene hypothesis through Helicobacter pylori infection

Unraveling the mystery of the hygiene hypothesis through Helicobacter pylori infection

Epidemiological studies have revealed an inverse association between Helicobacter pylori infection and the incidence of allergic asthma. This association is consistent with the hygiene hypothesis, which posits that exposure to microbes early in life prevents the later development of allergic diseases, and has been reproduced in mouse models of asthma. In this issue of the JCI, Oertli and colleagues report that H. pylori infection in neonates elicits tolerogenic DCs that produce IL-18, which drive the generation of Tregs that subsequently protect the mice from allergic asthma. This finding strengthens the intriguing link between pathogen exposure and allergic disease. 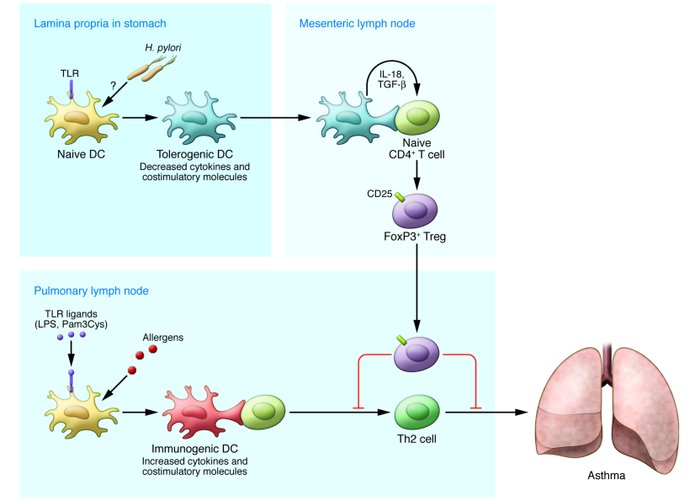 DCs in the airways capture allergens, process antigens, and migrate into pulmonary lymph nodes, in which they initiate antigen-specific Th2-skewed immune responses, which ultimately cause asthma. When infection occurs in neonates, –exposed DCs in the lamina propria of the gut display impaired maturation, resulting in tolerogenic DCs. IL-18 derived from these DCs acts directly on naive CD4+ T cells in gut regional lymph nodes (mesenteric lymph nodes), causing them to become Tregs that subsequently suppress asthmatic immune responses in the airways.