Depletion of CD4+ T cells from the gut occurs rapidly during acute HIV-1 infection. This has been linked to systemic inflammation and disease progression as a result of translocation of microbial products from the gut lumen into the bloodstream. Combined antiretroviral therapy (cART) substantially restores CD4+ T cell numbers in peripheral blood, but the gut compartment remains largely depleted of such cells for poorly understood reasons. Here, we show that a lack of recruitment of CD4+ T cells to the gut could be involved in the incomplete mucosal immune reconstitution of cART-treated HIV-infected individuals. We investigated the trafficking of CD4+ T cells expressing the gut-homing receptors CCR9 and integrin α4β7 and found that many of these T cells remained in the circulation rather than repopulating the mucosa of the small intestine. This is likely because expression of the CCR9 ligand CCL25 was lower in the small intestine of HIV-infected individuals. The defective gut homing of CCR9+β7+ CD4+ T cells — a population that we found included most gut-homing Th17 cells, which have a critical role in mucosal immune defense — correlated with high plasma concentrations of markers of mucosal damage, microbial translocation, and systemic T cell activation. Our results thus describe alterations in CD4+ T cell homing to the gut that could prevent efficient mucosal immune reconstitution in HIV-infected individuals despite effective cART.

Alterations in the CCL25-CCR9 axis that drives the gut homing of CCR9+β7hi CD4+ T cells in HIV-infected individuals. 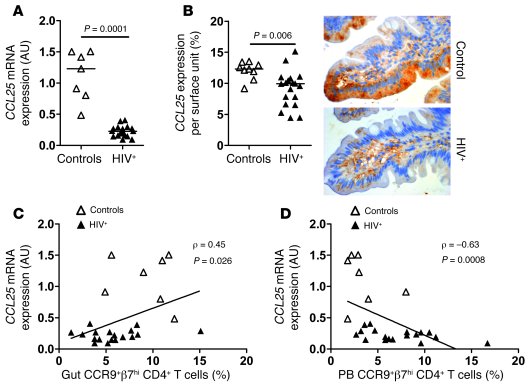