The good and the bad of vitamin D inactivation

The good and the bad of vitamin D inactivation 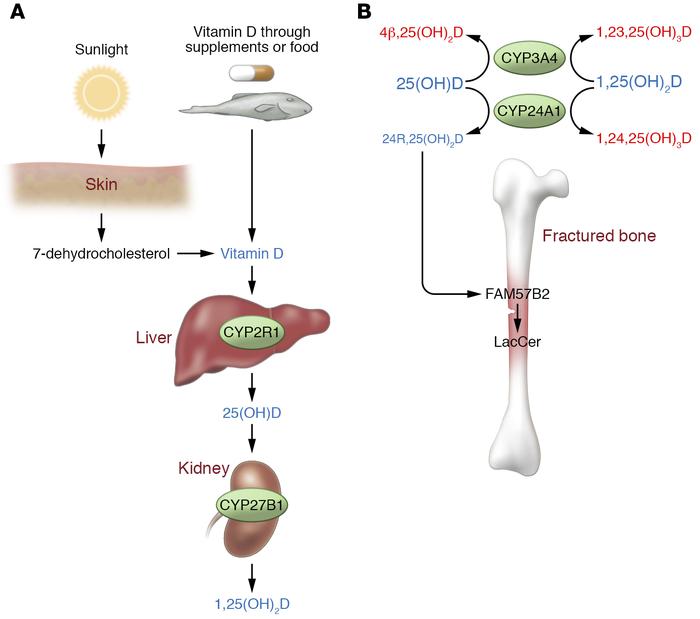 () Ultraviolet radiation results in the conversion of 7-dehydrocholesterol to pre–vitamin D, which isomerizes to vitamin D in the skin. Vitamin D can also be obtained from nutrition. Vitamin D–binding protein transports vitamin D to the liver, where it undergoes 25-hydroxylation by CYP2R1. CYP27B1 further hydroxylates 25-hydroxyvitamin D at the 1-α position, resulting in the formation of the active hormone 1,25-dihydroxyvitamin D. Although this latter enzyme is widely expressed, the kidney is thought to be the major source of circulating 1,25-dihydroxyvitamin D. () Vitamin D metabolites are 24-hydroxylated by CYP24A1. While these metabolites were previously thought to be inactive, binding of 24R,25(OH)2D3 to FAM57B2 in the fracture callus leads to the production of lactosylceramide (LacCer), which is essential for the effects of 24,25(OH)2D on callus formation and fracture healing. While CYP3A4 plays a minor role in normal vitamin D physiology, a dominant gain-of-function mutation in leading to accelerated vitamin D inactivation has recently been identified as the molecular basis for two cases of early-onset rickets. Vitamin D metabolites thought to be inactive are shown in red.